This last weekend Manchester (UK) was buzzing PHP all over the place, because PHPNW12 was held in the city center! I arrived on Thursday, a day before the tutorial day and had an opportunity to talk to a bunch of early attendees and got to meet new faces in the community.

For the past 4 years I've been attending this community driven conference, seeing it grow into a professional organized event run by professionals that know their stuff on both PHP and organizing a good gig. And I was really honored to be the closing keynote for this year's conference.

PHPNW12 is known to have incredible good tutorial sessions, given by involved people into any given project. This time it was no different. I attended the  Zend Framework 2 tutorial track given by no one less than Rob Allen (@akrabat) and Evan Cory (@EvanDotPro). Since they were heavily involved in the development process before Zend Framework 2 was stable, they were best positioned to give this tutorial. And they did a great job! I even got a certificate to prove I participated this tutorial.

In the evening a hackathon session was organized and in2it vof was proud sponsor for the pizza's. We should also have sponsored the wifi as lack of internet was a serious issue during this event.

The conference itself was a great event on it's own. Meeting new folks and seeing old friends is one of those magical moments you experience when going to such a community driven conference. But Jeremy Coates (@phpcodemonkey) and his crew did a great job putting great names down for this conference. Names like Thijs Feryn, Lorna Mitchell, Igor Wiedler, Ian Barber, Rowan Merewood, Mike van Riel, Ben Waine and Anthony Ferrara (just to name a few). And guess what, the wifi was stable during the whole conference!!!

I had the honor to close this conference with a community keynote called "Community Works for business too!", a talk to inspire business owners and to provide great arguments for developers within businesses to become more involved in community work. Even though the audience felt it was too much focused to business owners, I still believe it was a magical closure for three great days of brain hurting talks and enormous amount of information. I'm already looking forward to next year.


I also want to express my sincere gratitude to Rob Alan (@Akrabat) for taking an awesome photo of me. 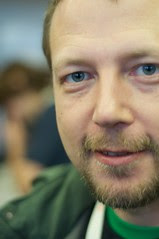